For those wondering why I have been posting at a higher frequency than usual, I am beginning a 30-Day–30 Clumps–30 Posts challenge for the month of September.  Can I really do it?  Tune in and see!

I was going over to a friend’s house today and thinking of the phrase “nose to the grindstone.”  It’s how you get to feel in September.  The back-to-school imperative.  And I realized I was walking over a grindstone, or millstone, at the bottom of their stairway.  I love this stairway:

Back to work.  From this vantage point, the pile of paper doesn’t look so foreboding.   I weighed it.  It was four pounds of receipts and other sensitive-information stuff.  Our parents’ generation never had to worry about this kind of thing.

It didn’t even take that long to shred, given time-outs for a paper jam (over-eager) and the shredder’s motor overheating. The job accomplished two things: first, making a dent the paper jungle — our worst clutter problem — and also, keeping a loud, steady noise going in the way-too-quiet, empty house.

Lo and behold, another bag of already-shredded of paper sat nearby, waiting to be recycled.  Here’s the after picture, a combination of the two. 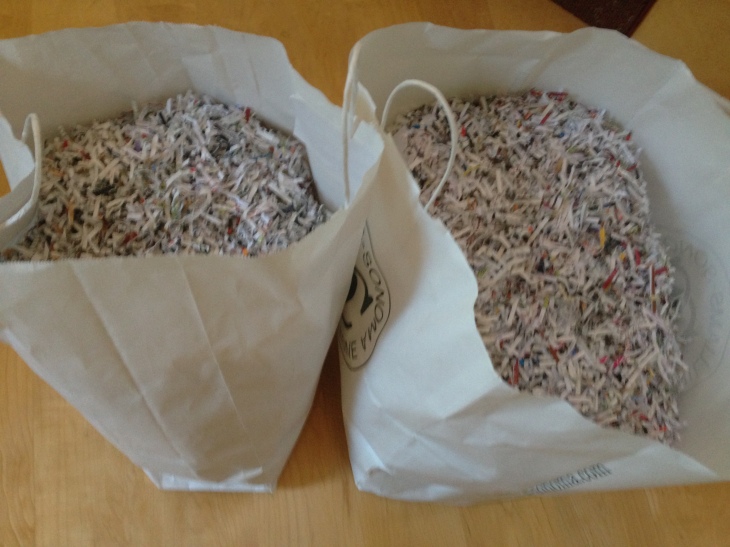 Ready for the recycling truck.  Note that bad old suitcase of yesterday’s post kicked to the curb.

I was inspired by the story on the front page of today’s Philadelphia Inquirer.  Endurance swimmer, 64-year old Diane Nyad, became the first person to swim from Cuba to Florida, approximately 110 miles, without the help of a shark cage.  It was her fifth attempt.

“I have three messages,” she said,  “One is, we should never, ever give up.  Two is, you’re never too old to chase your dream.  Three is, it looks like a solitary sport, but it is a team.”

I would like to take a moment to thank my older daughter and my blogging mentor, Jane — my team — for their steadfast encouragement.  They have so often rescued me from the sharks and jellyfish of my inner demons and kept me on track.