I was not going to allow my daughter to bring this suitcase to college again.  The darn thing was a lemon!  Just about everything that could fall off or break, did.  Monster-bag — you are now a clump in the dump.

In with the new.  Oh yes, maybe the thick melancholy I have been feeling lately (urges to turn back the clock, fixation on children’s literature…) might have something to do with my baby bird flying the nest again.

Our youngest daughter started her sophomore year of college yesterday. Last year we appreciated all the hand-holding that tender parents of freshmen deserve: activities and speeches to reassure that this was a wonderful place to leave our darling girl.  This year, we got the gear in her room and realized she would really rather sort it all out herself. Goodbye … we love you!   Done.

Though she didn’t spend a lot of time at home this summer, her presence was deeply felt.  The endless weeding I wrote about yesterday called to mind the myth of Sisyphus, (quoting from Wikipedia here) “a figure of Greek mythology who was condemned to repeat forever the same meaningless task of pushing a boulder up a mountain, only to see it roll down again.” Discouraging to the max.  I would make great headway, then go away on a trip and come home to find the darn things had roared back, stronger and more plentiful than before.

This cycle continued until my younger daughter turned on her prodigious work ethic and slayed those weeds.  (This one was kind of pretty.)

Then she became the Mulch Maven, a bare-footed earth goddess, spreading newspapers over the ground first to discourage future growth.

Even when not saving me from landscaping nightmares, her quiet presence was lovely.   Love hurts.

While waiting in the car for my daughter and my husband to pick up the key to her new dorm room, this was my view out the windshield. Doesn’t it look like the tree was trying to give me a consoling hug? Am I losing it? (Maybe a tad too much time spent in the plant world?)

That night, some good friends invited us to go out to see the movie The World’s End.  It was a hilarious distraction from the newly empty feeling. Without giving anything away, the story revolves around one character trying to relive the happiest time of his life.   As you might imagine, it doesn’t work out as planned. 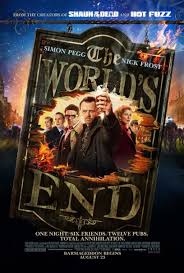 The key is to live in the moment and enjoy each passing season.  You can’t turn back the clock, nor would you really want to.  I’m getting there … after all, it’s not the end of the world.