The following post, and the clump it describes, were yesterday’s work.  I was a little too ambitious in the array of subject matter I wanted to cover.  At the end of the night, I cared too much about what I was writing about to click the “Publish” button without feeling that I had gotten it “right.”  This has been edited down several times, as long as it is.  For something so close to my heart, there probably is no “right-enough.”

Here, below, is today’s pile deconstructed.  I am in the final stretch of my paper pile challenge: 28 piles in 28 days, and I have a confession.  Many days during this month I have been tired, time-starved, or both.  I’d pick and choose amongst the piles and say to myself, ‘Oh, I can’t do that one today’ … or, ‘No, certainly not that one!’ … but the jig is up.  It’s “heartbreak hill” in the Boston Marathon for me.  I only have the difficult piles left.

Two revelations came to me this morning.  First, the papers from yesterday’s post had been unusually difficult to get through, and it wasn’t until today that I realized that the solution was in the very quote I had posted from Oprah Magazine, about assigning everything its own home.  I found the papers difficult because they didn’t have homes.  Many items are things I should file, but they would be the only item in the file. 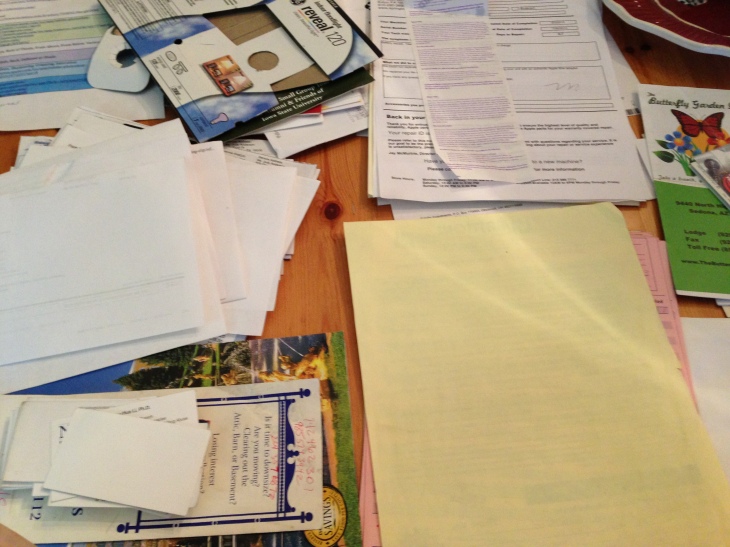 For instance, a certificate of authenticity for a bird house made of recycled parts from the Chalfonte Hotel in Cape May NJ, as well as an article about the man who crafted it.  I want to save it … but where?  I don’t want to set up a file for bird house, or certificates, or even miscellaneous.  So a small sub-pile is forming with other such items, with the hope that larger categories will become obvious by the time I finish.

The second revelation involves the actress and singer, Elaine Stritch.  Stay with me.  She was in a dream I had this morning.  In it, I wanted to tell her how much her role in Stephen Sondheim’s Company meant to me, and later the dream involved my searching online for a particular video clip of her.  I woke up wondering what the dream might mean.  I might have let it go, but in my paper purging I came across the article below in The Wall Street Journal Magazine.  She was one of several guest columnists writing their  definitions of Love.  And there was Miss Piggy, too, writing, primarily, about her love for Kermit The Frog, who I featured in yesterday’s post.  It seemed like a sign. 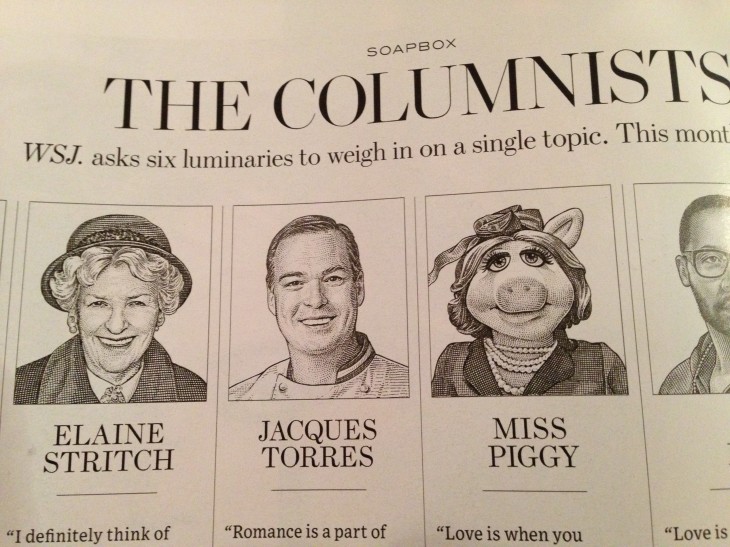 A little backstory.  When my sisters and I were young and wanting to get our ears pierced, my mother’s cousin Sally decreed that when each of us turned sixteen, we would get to visit with her in New York City and have the deed done.  It was our own coming of age tradition.  Cousin Sally was a psychiatrist who lived well, and she treated us to tickets to the best shows and meals at fine restaurants for our weekend.  She also gave us each our first set of earrings, made with our birthstones.  When my turn came, the show she took me to was Company.  We even made a skirt for the occasion, below, which will serve as today’s pigment therapy:

My mom was horrified when I came home and she saw the skirt.  “She cut up Aunt Jenny’s pillows!!  To make a mini skirt!!  I can’t believe it!!”  Indeed, Cousin Sally had cut up her mother’s beautiful crazy quilt pillow covers to make the skirt.  I will never forget walking into that Broadway theater and feeling as though everyone was looking at the coolest skirt in the world.  Aunt Jenny’s gorgeous antique fabrics were at once perfect for those hippy-dippy days, and elegant, too.  Here’s the back: 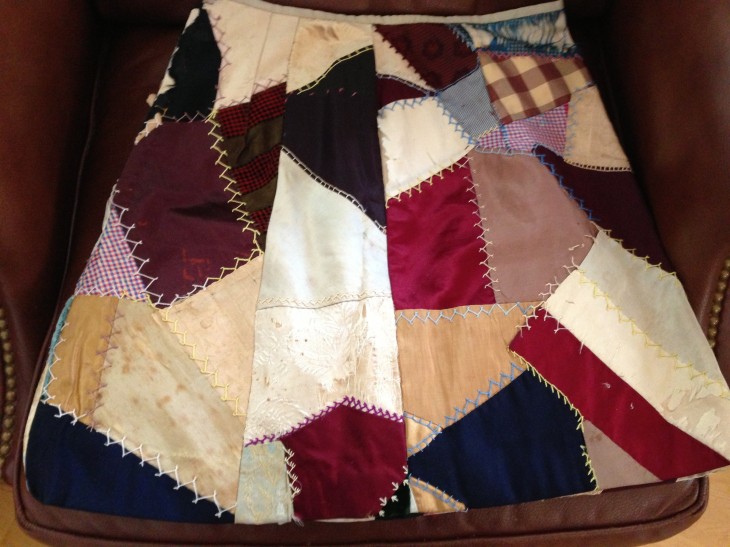 My bright pink stitches along side my Great Aunt’s:

The fabrics are incredible, though through the years some have deteriorated beyond repair. 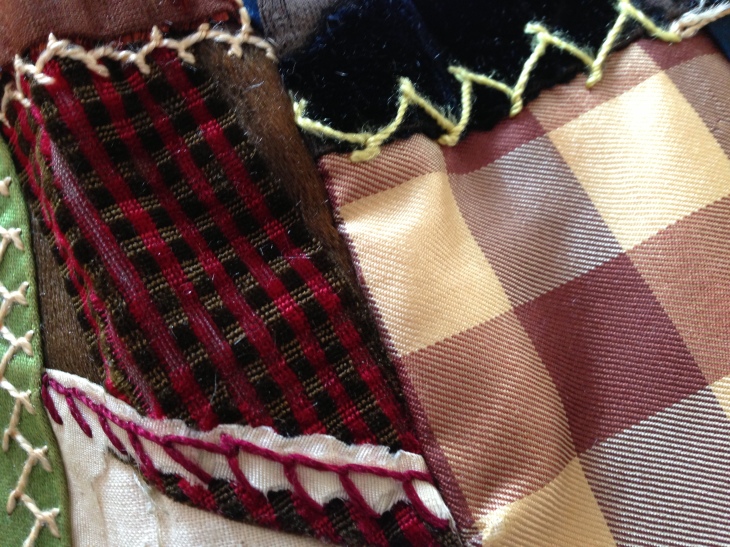 I would love to have seen the original garments from which the pieces were salvaged. 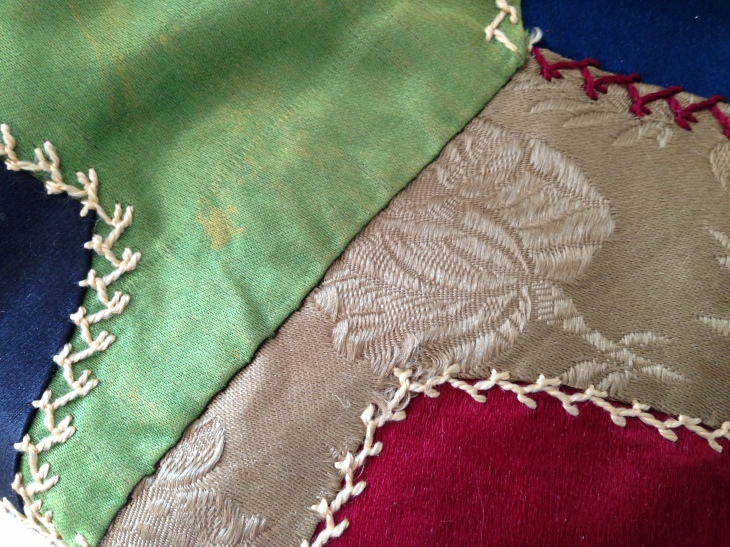 In the spirit of Cousin Sally, I let my two daughters wear the skirt when they were teenagers, allowing it a little extra life and fun.

Company was a revelation to me.  I had never seen anything like it … funny, poignant, profound, slaying social conventions, cutting to the bone … brilliant.  At intermission, Cousin Sally’s brother, a Catholic priest, expressed his heated disapproval that Sally was exposing me to such dicey material.   When I went home I immediately bought the soundtrack album, played it incessantly, and told my sisters what happened in every scene.   I was nuts about it.

So, back to Elaine Stritch and the meaning of the dream.  She played a cynical, hard-bitten woman named Joanne in the show.  The video I was trying to find in my dream was a seven minute clip of a documentary made about the recording of the soundtrack.  I couldn’t believe the struggle she went through recording the song, “The Ladies Who Lunch.”  She was performing the song on Broadway, for heaven’s sake, and the director of the soundtrack recording says, “Okay, once more from the top, sung, please.”  She says while watching the film, of the experience, “I know they’re right, and I can’t do it, and it’s breaking my heart; but not my spirit.  You cannot quit …”  It is heartbreaking to watch.  I dare you.  But it has a happy ending.  She comes back the next morning, “matinee day,” coiffed and in make up, and just nails the song I heard and played a trillion times.  She looks the part … like one of the ladies who lunch, who can skewer the other ladies who lunch.  As superficial a change as it was, I suspect the spiffed-up look made a difference.

I needed to remember the indomitable spirit of a fighter who does not give up when the going gets tough.  Also, I have been wondering about what I want to get from all this de-clumping.  I don’t expect perfection.  I will never be that (much more crazy quilt than orderly blocks). But the seemingly superficial aspects of the organization of our home seep into our consciousness, affect our sense of self-worth and the role we play in the world and in life.